An invitation to write the libretto for a new opera is a rare thing; planning and executing a new piece is a vast undertaking, but an essential one for the art form’s survival. In the case of BLISS the offer to me was irresistible as the circumstances seemed ideal: a great opera company, a challenging subject and a formidably talented composer writing his first opera.

That invitation came to me early in 2007 and, more intrigued than daring to be scared by the magnitude of the responsibility, I set to with the book and, after reading it several times, began making minimalist notes describing the events and the thoughts of the characters, hoping all the while for some kind of osmosis to siphon them into my psyche. I needed to re-fashion them for an operatic setting which could remain faithful to Carey’s original. I had to decide what was important, what drove and maintained the momentum of the drama, what could be left out, what had to remain and which extra moments we might retain to contrast and point up the main story; in short, every syllable of the libretto had to be there for a good reason; I had to get to know the characters so well that that they would start to speak – or rather sing – to me. 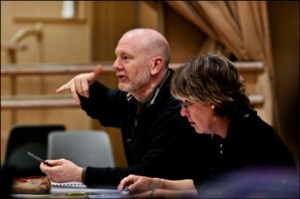 What has emerged is of course directly inspired by that wonderful, colourful novel; it has been distilled, reordered, taken off the page and morphed into words to be heard and to be sung; some characters have modified names – Joel = Johnny, Bettina = Betty, Honey Barbara = Honey B – all for practical, aural, reasons; some scenes take place in a different order, others are expanded and extended. Much is missing; Harry’s and also Betty’s parents were discarded at an early stage as they could only drag the story backwards. Though there are no set-piece `numbers’ in a novel, the episodic nature of this one seemed to demand contrasted scenes containing musical numbers separated by conversations (aka recitatives) to speed the drama from one situation to another – a method of opera composition that has survived pretty well for over 400 years. In fact BLISS seemed to tick the boxes of traditional opera quite extraordinarily; the libretto seemed to progress quite easily from moments of action to moments of reflection e.g. from heart attack to quintet in the opening scene and from bantering duet to a moment of stillness with Nurse’s pathetic aria in the asylum. Somehow the whole piece began to emerge almost of its own accord.

Early in the process Harry’s three arias, as Songs of Joy, fulfilled a commission to Dean from Sir Simon Rattle for the concert celebrating his return to the Royal Liverpool Philharmonic Orchestra in October 2008. Writing these contrasting texts for Harry Joy at an early stage gave me an opportunity to consider our central character and to anchor him into the drama, and it was a privilege to write them specially for Peter Coleman-Wright. For the Sonnet that became the opera’s finale, I dared put Carey on the back burner and looked to Milton for a new style – our ending of the story is different to the book, and it needed something `other’ and poetic as well as final. 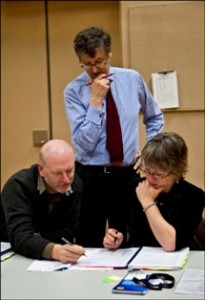 I certainly had more fun than I expected trying to find out what Hell was like by looking through Dante’s Divine Comedy; but Act Three was by far the hardest act to write. Life in an asylum (I worked as a music therapist and had some experience of mental hospitals in the 1970s) and in a home where the family breaks apart (another experience of my own), crowned by total meltdown, proved to be emotionally challenging. Of course I don’t know how all the agonising joys and sorrows of BLISS will affect our audience, but I do know that opera is an art that, using resources beyond the reach of mere language, reflects human behaviour terrifyingly truthfully; facing that so closely has been a profound experience.

In the opera-writing process the words are, ideally, in place before the composer starts writing the music. In this instance, the composer already had a lot of music ready in his head as Dean had, for a long time, nurtured the dream of writing an opera based on Carey’s first novel. He had even written an orchestral piece, Moments of Bliss, based on major events in the opera. So he was ready to pounce on the words like a tiger, and when it came to the composition it seemed to be a fluent process which I think is reflected in the momentum of the piece. It may have been an unexpected bonus that we came to the task from opposite poles; I am a Pom, had never read the book and came to it completely freshly, so pulling musical ideas out of the scenario, like rabbits out of hats and offering them to Brett as a shop assistant might offer this shirt or that – ‘surely Sir you’d prefer a trio to a quartet here?’ was fun. He always knew which choice to make, and thus he was the perfect editor for me: after our first meeting in London in January 2007 and a day in Berlin in May, we met again in January 2008 in Melbourne, a few weeks after I had completed the first draft of the libretto, and hammered it into shape over ten days of high-octane, exhausting and exhilarating work in which no thought, scene or syllable escaped close scrutiny from us both.

The genesis of BLISS has been a genuine collaboration; the libretto wouldn’t be what it is without the help of the director, conductor, singers, music staff and, most crucially, the composer himself. I have no doubt that I shall look back on the making of this opera as an opportunity I wouldn’t have missed for the world, indeed I can’t resist saying that for me it has been – Bliss.