The Silver Tassie is Mark Anthony Turnage’s second opera, following his hugely successful Greek (1988). The third,  Anna Nicole (2011), was commissioned by the ROH Covent Garden, as was his children’s opera Coraline (2018).

The premiere of The Silver Tassie took place at the London Coliseum on 16 February 2000. Gerald Finley was superb as Harry Heegan, the footballing hero who wins the cup, only to have his life ruined when he loses the use of his legs at the front in the First World War battle front in France. The supporting cast included Sarah Connolly, Vivien Tiernay, David Kempster, John Graham-Hall, Anne Howells and Gwynne Howell. Paul Daniel conducted the show, which was directed by Bill Bryden and designed by William Dudley. The production was shown on BBC2, 30 April 2000 and the CD recording was soon released. 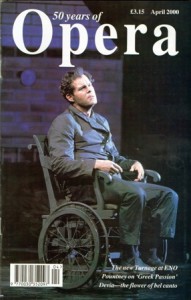 ENO revived the opera, with Garry Magee as Harry Heegan, in June 2002. Meanwhile there were productions in Dortmund, Germany (2000, as Der Cup) and in Dublin, Eire (2001).

On 11 November 2018 the BBC Symphony Orchestra gave a semi-staged performance of The Silver Tassie at the Barbican Hall in London, as part of their centenary commemoration for the end of the 1914-18 war. Ryan Wigglesworth conducted a superb cast, led by Ashley Riches and Sally Matthews. Many commented that the opera deserves a new production by a major opera company.

“This concert staging of Mark-Anthony Turnage’s opera based on Sean O’Casey’s play was forcefully conducted by Ryan Wigglesworth and sung by a consistently strong cast.” The Guardian

In  2001  composer and librettist were awarded the Olivier Award for Outstanding Achievement in Opera.

AH: The work was composed over a long period. The libretto was drafted in 1994-95 and the music written 1997-99. Conditions were ideal; I was then living round the corner from Turnage and we had the full support of what was then the ENO studio. The piece was carefully workshopped with many of its future cast. By the time rehearsals began on 4 January 2000 – the cast knew their roles well. 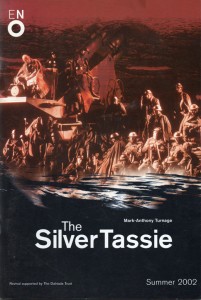 ‘Here was a creative team that knew what it was doing… The works of Britten came to mind.’
The Sunday Times

‘Sean O’Casey’s play, here crafted into a tight, clear libretto by Amanda Holden. If anything… her version strengthens the sententious original….’
Observer

Holden has made a brilliantly concise libretto from O’Casey’s play.
Opera

Amanda Holden deserves great credit for providing such a strong structure for Turnage to musicalize, for reducing O’Casey’s text so skillfully and for coming up with such singable lines. In many ways her libretto improves on O’Casey’s flawed original as a piece of drama.
Opera

Harry’s farewell song in Act I sets a Robert Burns poem which supplied the title of the original play; Turnage thought it is was too short for the length of music he needed for this very important scene; the second verse – which places the poem more firmly into the character – is by the librettist.

Oh bring to me a pint of wine
and fill it in a silver tassie,
that I may drink before I go,
a service to my bonnie lassie.

I’d rather stay where I belong
than stride the battlefields of Crécy,
but my resolve will yet be strong
‘til I come back to my faithful Jessie.

The trumpets play, the banners fly,
the glittering spears are ranked and ready;
the shouts of war are heard afar,
the battle closes thick and bloody.

It’s not the roar of sea or shore,
that makes me longer wish to tarry,
nor shout of war that’s heard afar…
it’s leaving you, my bonnie lassie!