AH: I have always been fascinated by the third Beaumarchais Figaro play; its two predecessors, The Barber of Seville and The Marriage of Figaro, simply don’t tell the whole story.

For this modern version of the 1792 play, I took some licence with the original and, having funds for only six singers, we had to leave out Susanna; but Figaro answers for his wife and the other characters retain their original identities:

The Count has renounced his title and is now plain Mr Fitzroy. His financial adviser, Burgess, schemes to rob him and also reveals to him that Leo is not his son – Leo’s late father was a young family friend, Charlie (Cherubino), a war casualty. Flora finds she is the daughter of of Mr Fitzroy by a previous servant girl (Barbarina). These revelations cause a huge family crisis; Figaro manages to outwit Burgess. Leo and Flora fall in love. Finally Rosa leaves her husband; but Figaro remains, still the faithful retainer.

The production set the opera in 1992; it is scored for six singers and a six player chamber ensemble. The roles (taken from the Beaumarchais) are Mr Fitzroy (Count Almaviva), Rosa (Rosina his wife); Leo (Léon, their son) ; Flora (Florestine, the Count’s ward); Figaro (the Count’s manservant); Burgess (Béjerass, the Count’s advocate).

The show, directed by Bankes-Jones and conducted by Stuart Stratford, opened 20 February 2004 at The Bridewell Theatre and went on tour, it had been workshopped at the Battersea Arts Centre in the autumn of 2003. 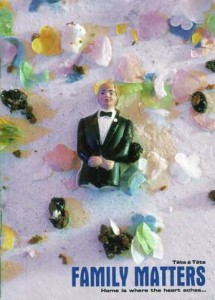 Here you are then, husband and son,
to judge the guilty mother,
the unworthy wife.
It was one single moment
(to Leo) that brought great joy to me
(to Mr F.) and to us this sorrow and strife.
At last the truth is uncovered
and now I am ready to die.

(to Mr F.) Sir – my mother’s mistake was no crime,
it was wrong that she suffered in shame,
And now, as you wish, I shall leave you for good
and take on my own father’s name.