‘Every single word of Amanda Holden’s fine and easy new translation can be heard (and normally I reckon even opera in english needs subtitles).’
Independent on Sunday

Sung in English, in Amanda Holden’s authoritative and voice-friendly translation, this performance caught the audience early and held it.
Opera 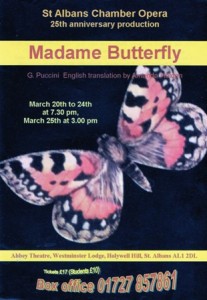 This translation was commissioned by Raymond Gubbay for his Royal Albert Hall arena production.  The show, directed by David Freeman and conducted by Peter Robinson, opened in February 1998 and toured to the Sheffield Arena in October.

The production has been revived at the Albert Hall five times, most recently in February/March 2015, when it clocked up its 100th performance. The design by David Roger has been a consistent hit, with the arena a magical Japanese water garden in act one and the water drained away leaving  dry stones for Act II.

`Some years ago I happened to attend five different productions of Madam Butterfly in the space of a few months. In the event, I was slightly surprised that the one that most palpably moved the audience – myself included – was an arena staging at the Royal Albert Hall, an intelligent, visually beautiful realisation by David Freeman. Both cast and conductor were excellent, but I’m quite sure that the crucial factor was Amanda Holden’s fine English translation, which obviated the need to think consciously about the Italian text or even to look at surtitles – it just affected you spontaneously.’ The Guardian 16 February 2016 (George Hall)

In February 2017 the King’s Head Theatre in Islington, London staged a cut-down version of Madam Butterfly for just five singers – Butterfly, Suzuki, Pinkerton, Sharpless, Kate Pinkerton and a (silent) child – by AH and Panaretos Kyriatzidis, who reduced the score remarkably successfully. Gone were all the other characters – Goro and the Bonze, Yamadori and the chorus, and the accompaniment was provided by piano and cello. Paul Higgins updated the story to the contemporary Japanese Maid Café milieu, which was as convincing as Puccini’s original geisha version of 1904-07.

`Cutting out subplots pares away an hour of running time and gives this Butterfly an immediacy and dynamism underscored by Holden’s clear-eyed and supple English libretto.’ The Guardian

BUTTERFLY
Suddenly we’ll see it, a wisp of pure white
smoke on the horizon, coming slowly nearer,
and then the ship appearing.
So we watch the frigate steaming into the harbour,
thundering her greeting. See that? What did I tell you?
I shall not go to meet him, oh no.
I’ll go and stand on top of the hill there just waiting,
I’ll wait ‘til the moment when he appears here, and I’ll be patient.
A speck emerges from the crowded city,
a tiny little figure who starts to climb the hillside.
Is it he? Is it he?
And when he’s getting nearer will he speak? Will he speak?
He will cry: `Butterfly!’ from in the distance.
I’ll be remaining silent and keeping myself hidden,
perhaps to tease him, but so as not to die when first I meet him,
and he in his anxiety will cry, he will cry:
`My poppet of a darling, my skylark, my starling’
remembering the nicknames he invented…
And I promise you this, for it will happen.
Cast out your needless worries,
I am prepared to wait here forever.