The translation of this burletta per musica was commissioned by the London Guildhall School of Music & Drama for their production in 1994.  The cast included Toby Spence and Roderick Williams; Caroline Gawn directed and the production was conducted by Clive Timms.

This short comedy – one of five early one act operas by Rossini – has music as witty and fleet as The Barber of Seville. It is probably impossible not to laugh during a performance of this opera. 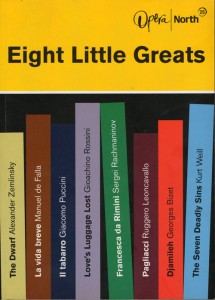 You arrogant deceiver,
you know I don’t believe you,
it’s no use even trying
to cover up your lying;
I know you’re an imposter,
a twister and a faker,
but such a trouble-maker
won’t treat me in this way;
whatever you may say,
you must and go away!

You saucy little hussy,
ridiculous and fussy,
there’s nothing that I owe you
and I don’t even know you;
I have a reputation
as white as any lily,
and you are rather silly
to treat me in this way;
whatever you may say,
I shall have revenge and stay.