‘There is an excellent new translation by Amanda and Anthony Holden which reflects quite uncannily the rise and fall of the Puccini’s phrases.’
Observer

The translation subsequently had several outings; Amanda wrote an alternative version (with reduced chorus in acts II & III) for English Touring Opera in 1994.

Amanda most recently overhauled the text substantially for the production by Jonathan Miller currently in the English National Opera repertoire and available on DVD. 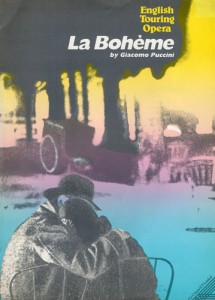 RODOLFO
I’m poor but I’m contented,
this is the life I treasure,
writing poems for pleasure.. .
In dreams or flights of fancy
and castles in the air,
I am a multi-millionaire.

But thought has been distracted
by two beautiful eyes
to which I find myself attracted;
they entered here when you did
and all my usual daydreams,
all those futile ambitions, faded into the night;
but I can live without them…