‘An exhuberant evening…. in Amanda Holden’s skilful translation.’
The Guardian

This translation was commissioned by Peter Bridges, music director of Garden Opera, and it was the third show the company took on tour to Kenya (2006). The production, by Martin Lloyd-Evans, substituted dialogue for the recitative and local childrens’ choruses were rehearsed ahead of each performance to play the courtiers. Serena Kay took the leading role on the African tour and the show was performed in several very unusual open-air venues – sometimes with (e.g.) giraffes among the spectators.

Other productions include: Iford Summer Festival, 2010 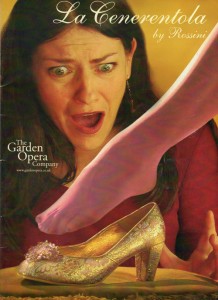 TUTTI
I am dreaming I’ve been sitting
here in paradise for hours.
Leaves are rustling, birds are calling,
bees are buzzing in the flowers
as I stroll among the pleasures
in this garden of delight.

But I have a dreadful feeling
that an awesome storm is brewing
and the earth itself is moving,
gently, softly, no mistaking;
for an earthquake may be breaking
with eruption and destruction,
rumbling, tumbling, shaking, crumbling
that will wake me with a fright;
and I fear my lovely dream may
quickly vanish out of sight.