‘The clear, sensitive new translation by Amanda Holden adds greatly to the vividness of the performance.’
Financial Times

‘His (Mark Elder’s) conducting gave abundant support to the voices and ensured that almost every word of Amanda Holden’s new translation cut clearly through even the densest textures.’
Opera

The translation was written for Tim Albery’s production of this vast opera which opened on 20th November 1993 at ENO. His designers were Hildegard Bechtler and Nicky Gillibrand; Mark Elder conducted.
Lohengrin was sung by John Keyes and, when Keyes was indisposed, by Richard Berkeley-Steele; Linda McLeod sang Elsa.

AH had been commissioned back in 1990 to write the text and it was excellent to spend plenty of time on it – too often there is too little space around the time alloted to writing what is effectively a new libretto, despite its compulsory faithfulness to the original. 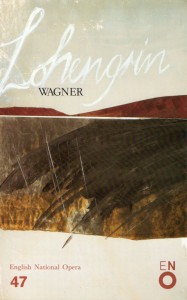 When all my hopes departed
God kept me from despair;
alone and broken hearted
I turned to him in prayer:

And from my groans of anguish
a cry of pain did rise,
surging with mighty power,
soaring above to the skies:

I heard the distant echo
and ceased at once to weep;
I closed my weary eyelids
and drifted into sleep.

CHORUS I
Is she bewitched?

KING
Elsa, defend yourself before the court!

ELSA
A knight in shining armour
appeared before my eyes,
I never saw such virtue
he looked so fair and wise.

A golden horn beside him,
he leant upon his sword;
thus he appeared from heaven,
my faithful, warrior Lord.

The comfort that he gave me
has eased my fear and shame;
I know that he will save me,
he will defend my name.