‘The production has the benefit of a first-rate new translation by Amanda & Anthony Holden, cleverly rhymed, full of telling phrases.’
The Sunday Times

‘No chance of wearying of Amanda & Anthony Holden’s translation which I like more each time I hear it.’
Evening Standard

This was Amanda’s first translation and the first of three she co-wrote with Anthony Holden; it was for Jonathan Miller’s ENO production in 1987. The work was a rushed job as the commissioned writer had dropped out and it was touch and go whether these inexperienced opera translators would finish the job in time. But, with much help from Mark Elder, it was completed in six weeks. This was the start of Amanda’s career in opera – at that time she was on the teaching staff at the Guildhall School of Music and Drama.

The translation has been often revived and revised. It was used (and slightly abused) for two subsequent productions at ENO. For David McVicar’s Opera North production in 1999, Amanda and McVicar worked together and revised the translation substantially; this is the version that is recorded in the Chandos Opera in English series. 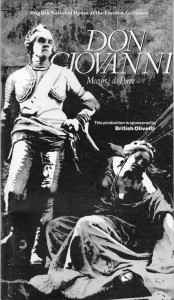 Night and day I slave away,
get no thanks, no food, no sleep;
rain or shine I must obey,
what a way to earn my keep!

What light from yonder window
doth shine for my pleasure?
My lady, deign to soothe my
lonely sighing!
I come to lay before thee
earthly treasure;
come satisfy my hopes
or watch me dying.