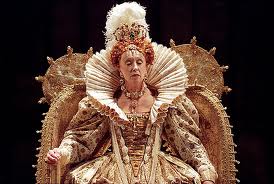 Josephine Barstow is home again. The Yorkshire-born soprano who has sung and acted her way around the world’s leading opera houses is back in Leeds to recreate her universally praised portrayal of Queen Elizabeth I in Britten’s 1953 opera, Gloriana. And, it seems, she is very happy to be so: `Opera North is a wonderful company, easily my favourite. I’m very happy working here, not just for artistic reasons – although they are extremely strong – but because without exception all the work I have done here has been a happy co-operation with the company. I’ve worked here with some extremely talented people and got good results, and that’s what I want. I don’t want to do anything for prestige or for money, I want to do them for their own sake.’

Considering her brilliant red hair and elegant demeanour – not to mention the dignified little dog who obediently stands guard under her chair while I talk to her – it’s hard to imagine a more apposite piece of casting than Gloriana: and Queen Elizabeth I found herself being dubbed a Dame of the British Empire by Queen Elizabeth II in early 1996, two years after the premiere of this production in December 1993. `She was very charming, but no, I don’t think she realized; she’s not awfully interested in opera.’ Barstow laughs loudly when I mention that Gloriana was called the crown of her career. `It has been said about other things. I don’t mind that, as long as they don’t say it’s the worst thing I’ve ever done.’

Gloriana is, though, `absolutely special’ for her. `That’s partly because it’s a great piece – I feel extremely sorry for Elizabeth, but I couldn’t avoid admiring and liking her, she had such style and verve. But it’s also because the conception and the fulfilment of that conception here was so extraordinary. It’s a team piece par excellence, and every member of the chorus was as involved as I was. They have been saying to me, “I can’t wait for Gloriana“, and that kind of attitude, as far as I’ve discovered, doesn’t exist anywhere else quite as much as it does here. Of course, there are wonderfully enthusiastic companies elsewhere, but here it’s been maintained for a long time. Going on tour brings people together too, they can’t just trundle in and do their job and get on the tube and go home again, it requires a bit more effort than that.’

Queen Elizabeth is just one of five formidable major roles Barstow has sung with Opera North in the last three years – the others are Tosca, the Kostelnicka (in Jenufa), Medea and most recently, and hugely successfully, her first Marie (in the revival of Wozzeck). But, life has been ever thus for her it seems: `No, it wasn’t unusual to do so many roles, it’s always been like that for me, perhaps it’s just unusual to do so many so soon in the same place.’

Barstow derives much satisfaction from thorough rehearsing and has a high opinion of the directors she has worked with at Opera North. She talks warmly of both Phyllida Lloyd, who directed Gloriana, and Deborah Warner, the director of Wozzeck. `There isn’t a vast difference working with a woman director except possibly a kind of sympathy because you are members of the same sex. Things are left unsaid that might not be by a man, that’s all. But they have absolute authority, and I think I’ve been particularly lucky. I like to be strongly directed, that’s what I need and also what I enjoy. I’m at my most unhappy when I’m floundering around because the director is floundering around.’

`To me a revival [as Gloriana is] always feels like starting again though that’s sometimes very difficult when you’re playing a role that you’ve done an enormous number of times before. One cannot turn up and say “the last time I did so-and-so, and this works and that doesn’t”. Even if I’m asked to do something that I know won’t work, I can only try it and perhaps prove that it doesn’t. That’s how a team works together. In opera it can be quite hard to rework things, but I always try to wipe the slate clean and start again.’

Barstow has always had extraordinary skill as both actress and singer, but she also has an astonishingly spontaneous quality on stage. `Some singers and actors will say that they become the character on the stage, but I never feel that that’s what really happens. The exhaustion of rehearsals comes from searching for the core of what the scene or the whole piece or the character is about. One of the processes of rehearsing a character is that you aim to see everything from their point of view. That ends in performance with you instinctively trying to get the audience’s sympathy for your character, and probably for you as a performer, through conveying to them what she is thinking.

`Take Katerina Ismailova [Lady Macbeth of Mtsensk, in Shostakovich’s opera, one of Barstow’s biggest successes at English National Opera]. There’s not a lot to like about that lady, and I realized that one can’t always look for the audience’s sympathy. I had to cope with portraying qualities I couldn’t sympathize with. In the last act Lady Macbeth talks about a black lake in a forest. I decided that that black lake was inside her; that’s when I started to make sense of the character. I just used to think blackly, after all, she didn’t give a damn about anyone or anything. And when I started to project that, funnily enough the audience then became sympathetic.

`Performances have to be technically controlled. I have to manipulate the moment all the time, not only to achieve what we as a team have agreed we’re going to try to aim for, but also to adjust slightly to whatever the chemistry is of that night. Every performance is bound to be different because every audience is different. That’s what’s magic about the theatre. I suspect that performance art, and opera in particular because of the huge power of the music, has the capacity to alter people’s lives. I have actually experienced that, I’ve met people thirty years after they’ve been to a performance and they have told me that they still remember the effect that it had. Most of the time, of course, we are entertaining, but the job has much more powerful possibilites than that, and that’s why it’s so wonderfully exciting and why I’m still doing it after so many years and loving it.’