‘…the satisfaction-factor was due to… and Amanda Holden’s direct, singable and communicative new translation.’
Opera

The chance to translate Massenet’s greatest opera came from English Touring Opera for their production by Robert Chevara. It opened at the Richmond Theatre on 18 October 1995. 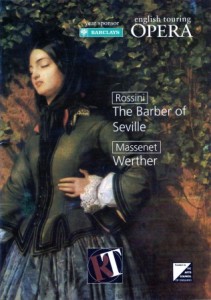 CHARLOTTE            Werther!  Werther!  Could anyone have told me that he would take such a hold on my heart?  But since he went away, I am sad and exhausted… and my thoughts are only of him!…  His letters, his letters!  Ah!  I read them all so often…  they are so charming yet they make me so unhappy!… I ought to destroy them… but I can’t!  [reading]  `I sit and write from my little bedroom on a grey December morning, it is as silent as the grave, and I’m alone!… yes!… all alone!…’.  Ah!  There’s no one there but him!…  Not a soul to provide him some affection or some tender care!…  God!  How could I have thought it kind to be cruel, to condemn him to such an exile as this?  [reading]  `The sound of children’s games rises to my window, such happy games!… and I think of the times gone by when all your little sisters and brothers played with us!  Perhaps they have forgotten?…’.  No Werther, they remember you and the happy times that we spent… and when you return…  but should he return?  Ah!  This recent letter fills me with terror!  `When you said Christmas Day, I shouted; “No, farewell”  and soon we shall discover who was right, who was wrong.  But if I do not reappear on Christmas Day at your house, do not take offence, weep for me!…  Do not take offence, weep for me!… Yes, once again you’ll read my letters with those most beautiful of eyes, but they’ll overflow with tears of sorrow…  Oh Charlotte, then you’ll be afraid!  You’ll be afraid!  You’ll be afraid!’