‘… when Amanda Holden has made such a fine translation, it demands that you hear every word.’
The Times: interview with Bobby Aitken, sound engineer

Amanda Holden’s translation, originally made for David Freeman’s fine staging in the Albert Hall and since revised, is absolutely first-rate. It is clear, direct, faithful and above all, musical. In contrast to some earlier versions, it unobtrusively follows the rhyme patterns of the Italian. Some of the lines – the acid test – sound as though they had been set by Puccini himself: `My modest little meal was interrupted’ and `They say I’m corrupt’ among many others.
Opera

Perhaps the most significant aspect, as with Butterfly, was the use of a new, clear, musical translation by Amanda Holden: the audience was hanging on every word…
Opera

The commission to translate Tosca came from Raymond Gubbay for David Freeman’s arena production at the Royal Albert Hall; it opened on 18th February 1999 conducted by Peter Robinson and the cast included Susan Bullock and Keith Latham. The production was revived in 2008.

AH: I revised the text with David McVicar for his production at ENO that opened on 21st November 2002 with Cheryl Barker, John Hudson and Peter Coleman-Wright; Mark Shanahan conducted and the desgner was Michael Vale; this production was revived in 2004.

Other productions include:
The Opera Project, at the Tobacco Factory, Bristol; 2008
New Devon Opera; 2007 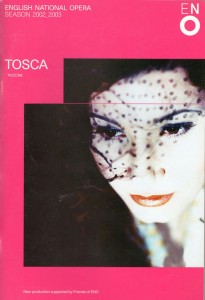 CAVARADOSSI
The contrasts of creation are so various in beauty!…
In Tosca’s raven hair, I find my inspiration;
but you my golden angel, with your halo of mystery,
you have eyes like sapphires, hers are dark as oceans!
Art in a sweet commotion, has confused human thought
throughout all history:
but as I paint her portrait, I’ve one single emotion,
ah! I only think of you, Tosca, of you!

TOSCA
Life was music, life was for loving…
these blessings prepare our souls for heaven!…
Often in secret, I tried to comfort or help those who suffered…
Always with true devotion, I said my prayers every morning in the chapel of the Lord…
Always in simple faith, offering flowers with my prayers…
Now in this hour of torment, oh why, dear God, ignore me,
oh why have you abandoned me to this?
I gave my jewels to the Madonna’s statue,
I raised my singing towards the stars to make them shine more brightly…
Now in my hour of need, ah why oh Lord,
ah why have you abandoned me to this?