‘The splendour and exhuberance shine through in the singing of the principals, who are helped by Amanda Holden’s effective new translation.’
The Times

The commission to translate this monumental work came from the Oxford University Opera Club for its production at The Playhouse, Oxford in 1991. The title role was sung by Ian Bostridge. At the time AH was translating Mozart’s other great opera seria, La clemenza di Tito for Scottish opera and was also about to embark on The Marriage of Figaro for Opera North.

Other productions include:
2010 ENO, conducted by Edward Gardner and directed by Katie Mitchell

2008 Birmingham Opera Company – as King Idomeneo or He Had it Coming – directed by Graham Vick, designed by Paul Brown and conducted by William Lacey. 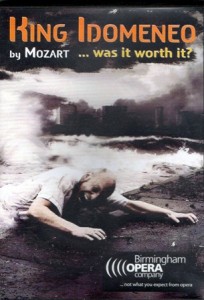 In my breast an ocean rages,
ever fiercer and unrelenting;
and Poseidon is still determined
that he’ll break me, and tear my soul apart.

Proud Poseidon, won’t you tell me,
since another tempest now rages
dragging me down, for what cruel purpose
have you saved my shattered heart?