‘Every word of Amanda Holden’s clear, ingenious translation was audible…I can’t remember when I last enjoyed a performance of Falstaff so much.’
Opera

‘Nearly every word is audible and the sparkling performances are built out of Amanda Holden’s brilliant translation.’
The Times

Falstaff, Verdi’s last opera, is the ultimate perfect operatic comedy; it was the first translation Amanda Holden attempted on her own. The translation was commissioned by City of Birmingham Touring Opera for the the 1987 production by Graham Vick. It opened on 17 September at the Cocks Moors Woods Leisure Centre in Birmingham on a tiny vertiginous stage designed (for touring) by Paul Brown. The conductor was Simon Halsey and its first rehearsal repetiteurs were Jonathan Dove (who wrote the reduced orchestration) and Jeremy Sams; the production was revived in 1995/6 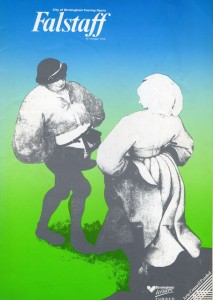 Life is a burst of laughter
so… be happy hereafter.
Your mind is a tempest whirling
always this way and that.
Everyone mocks you
whether you’re thin or whether you’re fat.
But it is best for him
who has the last laugh of all.