This translation of Carmen was commissioned for Raymond Gubbay’s arena production directed by David Freeman and conducted by Peter Robinson at the Royal Albert Hall, London in 2002 and revived there in 2005 and 2009; in 2010 it was performed at the O2 arena – the first opera ever presented at that venue.

As well as the complete dialogue, AH has translated the Guiraud recitatives. 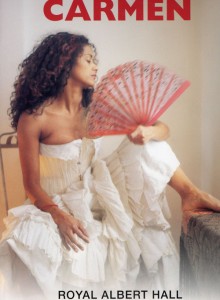 Love is like a defiant bird
that none can catch and none can tame;
Though you whistle you won’t be heard
if she refuses to play your game.

Nothing helps, neither threat nor prayer,
while one may speak, another’s dumb;
I may fancy him over there,
although he’s quiet, he will succumb.

For love is like a gypsy child
who lives a life that is as free as air;
If you don’t love me, I shall love you
and if I do you must beware!