‘Amanda Holden’s poised new English version of the libretto adds greatly to the tone of the evening.’
Sunday Telegraph

‘Amanda Holden has made the often witty English translation which drew loud laughter when Coleman-Wright’s Caligula, unrecognisable as a Venus in drag… throws away the line “this is crap (nail) varnish”. The way she puts the mantra of the British Conservative leaders — “We are all in this together” — into the mouth of a lunatic dictator provokes an appreciative frisson in London, where politicians stand at an all-time low in public esteem.’
The Australian 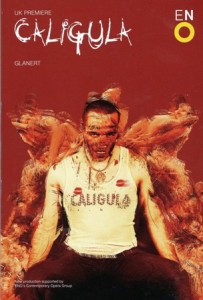 Detlev Glanert (born 1960), is one of Germany’s best-known living composers. Caligula is his seventh opera; its premiere took place in Frankfurt in 2005. On 25 May 2012, this startling piece received its UK premiere at the London Coliseum – the first of Glanert’s operas to be performed in Britain.

AH translated the libretto – by Hans-Ulrich Treichel after the 1938 play by Albert Camus. The production by Benedict Andrews was conducted by Ryan Wigglesworth with Peter Coleman-Wright in the title role and Yvonne Howard as his wife Caesonia. he production received an Olivier nomination in the 2013 awards.