‘One cannot fault the stylish way Amanda Holden’s libretto manages to hint at… myriad layers and underline some painful present-day echoes.’
The Times

This opera is based on the debut novel by Daniel Mason, a young American writer who wrote the book while studying medicine in Thailand. A British Military doctor in Burma, having insisted that the Foreign Office send him an Erad grand piano finds that he needs a tuner. The hapless young man is sent on a mission which involves more in the way of political intrigue than just keeping an eye on the Erard.

The mixture of exoticism, political corruption and Bach in the rain forest appealed to the composer Nigel Osborne who went out to the far east to find some sounds to complement the British army abroad. The librettist did some research on Erard pianos and took lessons in piano tuning…

The production, a co-commission from the Royal Opera House and Music Theatre Wales, opened at the LInbury Theatre on 8 October 2004 and then went on tour.  It was directed by Michael McCarthy and conducted by Michael Rafferty; Giles Davies, Donna Bateman and Steven Gallop took the main roles. 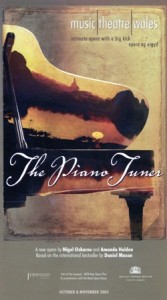 Felt and leather,
Pine and beech,
spruce and oak,
Ebony, mahogany…
Music of the spheres,
secret ringing in our ears.

Music enters the unconscious,
carries us away;
overwhelms beyond the realms
where human fingers play.