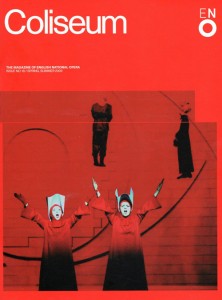 from COLISEUM the magazine of English National Opera
Issue/18, spring/summer 2003

Translating a text for performance in the theatre is like doing a vast multi-dimensional crossword puzzle while going on a long scenic journey. Its purpose is to sweep away a communication obstruction, but its art is elusive and complex.

I suspect we don’t often reflect upon how much we rely on translators. My childhood would have been rather different without the company of a children’s Homer or the originally Hebrew/Greek bible (always provided in translation on that desert island); we read books and hear plays in translation without giving the matter (or the wordsmiths) much thought. How marvellous it would be to read Tolstoy in Russian, Proust in French, Goethe in German, or Dante in Italian, but how many of us could honestly do it? Yet we unquestioningly listen to opera in those languages. I’m not suggesting that opera in translation should be the norm (as it once almost was), but I’m sure its pluses outweigh its minuses.

I first experienced ‘operatic’ works in English, which seemed only natural. I went with my grandmother to pantomimes and the famous Abingdon Handel operas, and with my mother to musicals, lots of G&S and Sadler’s Wells Opera, ENO’s forerunner. The occasional grander visits to Covent Garden and Glyndebourne seemed recherché and inaccessible in comparison, and I quickly became bored because I couldn’t understand the words. Now when I go to an opera sung in its original language, even one I have translated, I find it a different experience; trying to catch the words and/or reading the surtitles takes up too much brain space and stops me fully appreciating what the performers are trying to convey.

A translation isn’t any good if it sounds like a translation. Not only must it aspire to ‘read’ (and ‘sing’) as convincingly as the original, but also the original language is best displaced by something that relates closely to it in both character and meaning; and that means in style too, something that is easily overlooked. Colloquialisms will jump out like sore thumbs, and bad rhymes will sound contrived (though comedy can sometimes be accommodating). The translator should be invisible: his/her responsibility is to the work and to the audience, and imprinting oneself into the show will obstruct the smooth passage from one to the other. A translation that either misrepresents the flavour of the original or advertises its writer would more properly be called a ‘version’.

The good librettos I know – for example, The Turn of the Screw – are written in clear and direct language, with as few words as possible; the words merely provide the skeleton on which the musical flesh hangs. They are as important but as incidental to the music as a skeleton is to a body. For me, the only way to get to the flesh is to listen to the piece until the sound and as much detail as possible (stresses, rhymes, word-settings, etc.), get into my system by a kind of osmosis. I know this is process is complete when hear the music in my head as I look at it on the page. Experience also helps. After fifty years of music study, fifteen of them translating opera, I should know something of how operas and singers work, and which words will and won’t work. The imperative is absolute clarity. No unusual words will ‘go over’ with the required immediacy unless they have enough musical space, and no listener will have brain time to work out anything that isn’t immediately clear. Here Italian is enviable. It’s so precisely expressive, whereas English lumbers around in such a clumsy way in comparison, despite its larger vocabulary. So many Italian phrases end in a vowel, whereas we usually clunk to a close with a consonant.

Shock horror! I don’t believe that an expert knowledge of the original language is essential for a translator. Desirable, yes; essential, no. I’ve always studied languages with mixed success (my operatic archaisms have prompted gales of laughter in language classes), but an elastic sensitivity to one’s own language is much more important. For this endless task I use the biggest available dictionaries, the more the merrier, as the responsibility is to use words utterly appositely, in meaning and sound; I sometimes think I’ll end up knowing Roget’s Thesaurus by heart.

In performance you never will hear all the words, though I sense a strange new obsession among audiences who seem to feel they’re being short-changed if they can’t hear every one. Why does no one complain that they can’t hear the words when they’re in a different language? – because they aren’t listening for them. No composer has ever expected every word to be heard (or they certainly wouldn’t have written ensembles), but they wanted enough of them to be recognized. Mozart was thinking of his audience when he wrote The Magic Flute in German. And of course this is why Rossini, Donizetti and Verdi wrote operas in French for Paris, and why Verdi and Wagner commissioned translations for performances ‘abroad’. I once heard a performance of Otello in Budapest sung in Hungarian, during which the audience was rapt. The whole experience was a salutary one. I couldn’t even begin to understand the words, so the work emerged as a wonderful symphonic (in the etymological Greek sense, of course) mélange. I think this is akin to what audiences hear when they’re reading surtitles.

Handel seems to work exceptionally well in English and it was heart-warming to reflect, when I was translating Ariodante and Alcina for ENO, that he composed them up the road from the Coliseum – and for English audiences (albeit rather upper class ones, hence their ‘élitist’ Italian texts). He would return from his Italian visits with a pile of librettos. Most of them had already been set and proven by other composers, so Handel would use them shamelessly, nipping and tucking as he pleased (there were no copyright laws then). When I began work on Ariodante, Nicholas McGegan (the conductor) advised me to ‘go away and read some Alexander Pope’, which was a great help towards an eighteenth-century flavour. David McVicar (also the Alcina director), for whose new production I revised my Tosca translation, suggested that, to make the mood ‘a bit grander’, I inspire myself by reading some Jane Austen. And when I asked the Sean O’Casey Estate for permission to write a libretto based on The Silver Tassie, the only condition was that I should ‘be faithful to the spirit of O’Casey’. All these instructions were enablers rather than privations, offering me a style within which to fashion the words. Operatic words are never the stuff of everyday conversation, but they should not sound arch or unnatural. Handel uses very few words, so it’s harder to get them to sound fluent. Add a tight ABAB rhyme scheme and you’re definitely translating in a straitjacket up a gum tree with a minimalist vocabulary. Puccini almost seems verbose and a bit blowsy in comparison, but thank God there are fewer rhymes, which hold up the working process more than anything else. His word-setting for the narrative (rather than the arias) is more conversationally natural, so his operas are less inhibitive to work on.

Translating opera and living up to its grand qualities is a tough responsibility. The music inhabits, but also inhibits, every syllable: translating words without music is a piece of cake in comparison. So many of the answers you think of for that musical crossword puzzle won’t fit; the work takes ages, is often thoughtlessly derided and dismissed, and occasionally abused. But, whatever the success or failure of my work, I shall always be grateful to have had the opportunity to work with so many fine artists and to have made the close acquaintance of wondrous works of art and, perhaps, their creators. As a bland collective perception hurtles towards the convenience store of opera in the original language with surtitles, I sometimes fear that opera translation may be a dying art, but I shall go to my grave insisting that a good translation provides a more satisfactory theatrical evening than one spent hearing a text sung in a language that is neither yours nor, as so often, the singers’.